I participated in the Western Univeristy Engineering Competition in the Bioengineering theme, with a few friends who had invited me. During this competition, I got the chance to work on a solution to the cholera crisis in Yemen. We discussed implementing a low-cost and effective system of sanitizing water and increase infracstucture stability in the area.

One of the things that I got to learn during this experience was the systems engineering design process. This was a very new process to me however I got the chance to learn how to use it and apply it to a meaningful problem. One of the more impressive feats was the fact that I was able to lean this new process and apply it within 48 hours. Something that I particularly proud of. Overall we placed in the top 5 teams... out of 5 teams; however this was an excelllent learning process and something I am very proud of being a part of.

Cholera levels are high in Yemen, even more so during the rainy season as flash floods allow contamination of clean water sources by sewage (Oxfam, 2020). Within the first three months of 2017, cholera cases in Yemen reached 360,000 and total cases of cholera had reached up to million cases by the end of the year (Oxfam, 2020). The large scale of cholera cases within Yemeni refugee camps is a critical issue as “more than 8 million people lack access to safe drinking water and proper sanitation” (BBC News). Consequently, there is an urgent need for physician and consumer access to clean water and sanitization methods in order to mitigate this issue. 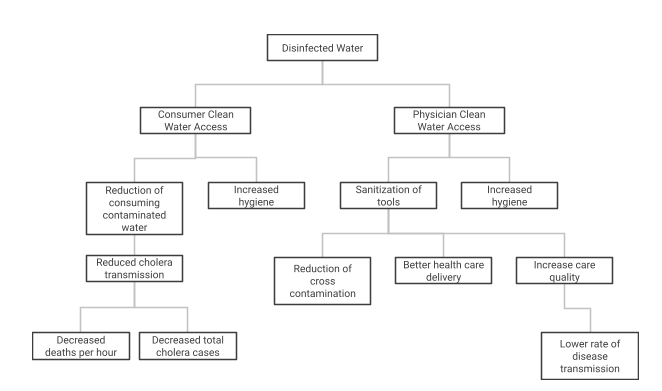 The system designed takes advantage of the inherent decontaminating properties of UV light (National Academies, 2007). Our system involves establishing small water sanitization stations at every refugee tent within the camp. The stations would be composed of a metal rack to hold bottles, alongside plastic bottles that would hold water. Contaminated water would be added to the bottles, and they would be placed outside, becoming decontaminated based on exposure to sunlight. By placing the contaminated water in sunlight, they become decontaminated after approximately 6 hours of exposure on days with high levels of sunlight, and after approximately 2 days on cloudy days with low sunlight levels (National Academies, 2007). In the case where contaminated water has a high level of sedimentation, preventing full exposure to UV light, simple table salt would be added to clarify the water (Zhang, 2012). Adding salt gets the particles of dirt to stick together and settle to the bottom, leaving the water clear enough for UV rays to effectively penetrate and disinfect. This works quite well with clay sediments, due to these particles usually having an electrostatic charge, making them stick to the charged ions in the salt. This mixture then easily sticks to other particles in the water, allowing the salt to easily pull particles out of the water. By providing these stations at every tent, all individuals would gain access to sanitary water sources, preventing an individual from contracting cholera.

Overall, our system provides a very economical method to improve access to clean water for ingestion and sanitation purposes, and in the case described, to specifically curb the spread of water-borne illness such as cholera. This is done through simple methods that require little resources. Availability and cost of plastic bottles and corrugated sheet metal was extremely vital in the design process, and accentuates the simplicity and economic benefits of the system. Additionally, the true advantage of our system is the extent to which it uses the resources and circumstances already available. A hot and sunny climate is perfect for this system, and these are usually the places that have a need for cleaner water. Also, plastic bottles are already abundant in such areas. Lastly, corrugated sheet metal provides many side effects that are beneficial. It is widely available in these regions, and has built in ridges that are perfect for laying bottles in to prevent them from rolling off. Also, it is quite lightweight and cheap compared to other materials and actually helps deal with heat in the tent by reflecting the sun’s rays. Overall, our system is the most simplistic, economical, and effective method of providing clean water to these people, improving their overall health and healthcare capabilities, and slowing the spread of water-borne illness.